Cambridge WWI – Something to Remember

Tom Hill recorded in his diary –
31 October 1914 ‘Still at anchor in Albany harbour. Took some photos of Pyramus and Philomel as they left on return trip to New Zealand.’
1 November ‘Left Albany at 7.30 a.m. Next port of call Capetown.’
2 November ‘Have been sleeping on deck last four nights. A fairly high sea is running with indications of a storm coming. It is a great sight to see over 40 ships close together.’ 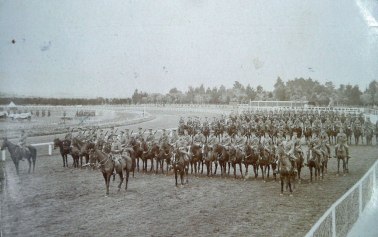 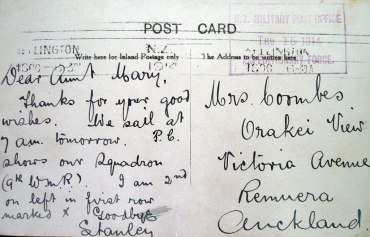 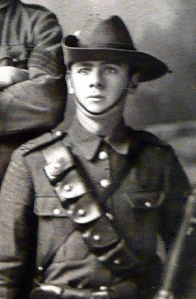 ‘Farewell in the Domain, Auckland. Embarked on Star of India.’

25 September ‘Woke up in morning and found ourselves back in Auckland harbour.’

28 September ‘Troops disembark and go to Takapuna. Had a good time at Takapuna.’

However, the convoy was ordered to wait for a more powerful escort and returned to Auckland. Several days were spent at Takapuna and Panmure and eventually the convoy sailed on 16 October 1914.

The local Women’s Hospital and War Fund Committee, with Mrs Isabella Gow as president, swung into action as soon as the war was announced. Dutch Auctions were held at private homes with nearly £100 being raised.
They helped raise money for a Hospital Ship, books and comforts for the training camps, and made up parcels for the boys overseas.

(In 1909 the women of Cambridge formed a Ladies Patriotic League and urged the need for establishing a scheme of universal military training. This committee is thought to be the first group of women in New Zealand to urge universal military training following the example of many British women. They also appealed to the women of the Dominion to assist in contributing towards the cost of a Dreadnought.)

The Cambridge District Contingent Fund was initiated by Mr Samuel Adams of ‘Waterside’ to assist the boys who left from the area. Mr M E Gibbons was secretary of the Cambridge Branch of the Soldiers’ Gift Fund and asked for volunteers to send monthly parcels to the men overseas.

13/459 Trooper Alf ‘Cocky’ Swayne, 13/728 Corporal Tom Phillips, 13/332 Trooper J Robert C ‘Fergie’ Ferguson, 13/461 Trooper Fabian Sperry and 13/479 Trooper Jim Watson, who were all territorials in the 4th Waikato Mounted Rifles, enlisted on the next Saturday night and were off on a great adventure to serve God, King and Country. 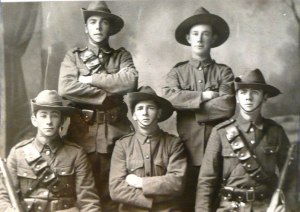 They received orders from headquarters in Hamilton to be medically examined by Dr Walter Stapley and then go into camp. Bob Simpson (Lieutenant with the Auckland Mounted Rifles) was the local marshalling officer and the first batch of men enlisting went to Hamilton under his charge on 11 August 1915.

One Cambridge volunteer, Arthur W McNeish was drafted to the Samoan Force with the wireless section. He was among 1413 men who had left New Zealand on 15 August in the Moeraki and the Monowai.

As territorials, the Cambridge men went fully equipped with rifle, bandolier, uniform, two blankets and messing gear. They also supplied their own horse, saddle, bridle and horse cover and set out to ride from the drill hall in Fort Street to the Hamilton horse bazaar, which was the assembly point.

Before leaving Cambridge they stopped near the Jubilee Fountain (near the Post Office) and were fare-welled by a handful of people including the mayor Mr George Dickinson.

From Hamilton the contingent of men and horses travelled by train to the concentration camp at Potter’s Paddock, now Alexandra Park, Epsom. On arrival in camp the horses were inspected by a veterinary surgeon (Major Lyons). If the horse passed the inspection the owner was paid £25 and the animal became the property of the Defence Department. Any horse which did not pass inspection was returned home and another horse supplied by the army.

At Epsom, army pattern horse equipment was issued. The privately owned bridles and saddles were placed in sacks and returned home, or if a buyer was found, sold on the spot.

As Alf Swayne left for camp he bought a saddle from Dick, Browning & Co a saddler in Duke Street. It cost him £4 5/- and he sold it in Auckland for £5 – but never got paid.

The men were allotted their regiment numbers and Auckland Mounted Rifles had the prefix 13/ before their numbers.

A few days later between 50 and 60 infantrymen left Cambridge for Hamilton en route for Epsom. They joined the 16th (Waikato) Company, one of four making up the Auckland Regiment.