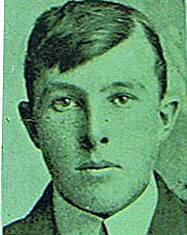 10/624 Eric Cecil Irving, the third son of Edward and Isabella Irving was born in the Bay of Islands but enlisted in Cambridge.

He went ashore with the Wellington Regiment and was killed in action on 29 April 1915. He was aged 25 years.

‘They had drawn two days supplies on the beach on the 27th and were ordered to Walkers Ridge were they dug in with the Australians. They attacked with bayonets and at midnight the Turks attacked with bombs. The attack was repulsed. The next day the Wellingtons improved the trenches and established communications. At one spot the men had to run the gauntlet as they carried water rations and ammunition on the top of the ridge. Enemy snipers were prominent and several men were shot while carrying supplies to the trenches. A system of telephones was badly needed as orderlies were also being killed by snipers, passing to and fro with orders.’  (Wellington Regiment War Diary.)

Patrols were sent out after dark which started to deal with the enemy snipers.

When the Wellingtons had completed their front line and thought they were well under cover, ‘we were to be instructed by the Turk in the use of machine guns for night firing.’ (The Wellington Regiment N.Z.E.F. 1914 – 1919 by W H Cunningham DSO, C A L.) Eric was one of 44 killed at this time and is listed on the Lone Pine Memorial.

Richard Stowers notes in his book ‘Bloody Gallipoli’ – His brother A E Irving received a letter from Lieut Alexander McColl,, ‘I am sure his ability in the ranks would have soon gained him much promotion and distinction  . . .  I can only add that he met his death whilst doing his duty like a true Briton and that death was instantaneous.’

It was extremely steep terrain with deep gullies and the Turks always on top.

The Australians and New Zealanders – ANZACs, held the middle and left end of the line. British and French were further down the peninsula. The New Zealanders mostly held the far left position on Walker’s Ridge, which covered a vital supply route, and an outpost called Quinn’s Post. Their closest listening post was 7 feet from the Turkish line. The strain of the constant noise took its toll.  (‘The Desert Column’ by Ion Idriess)